The tour of Veggetti’s exhibition "Tricolore 2022" based on his digital art started in Venice on January 20 and will end next year in Florida. 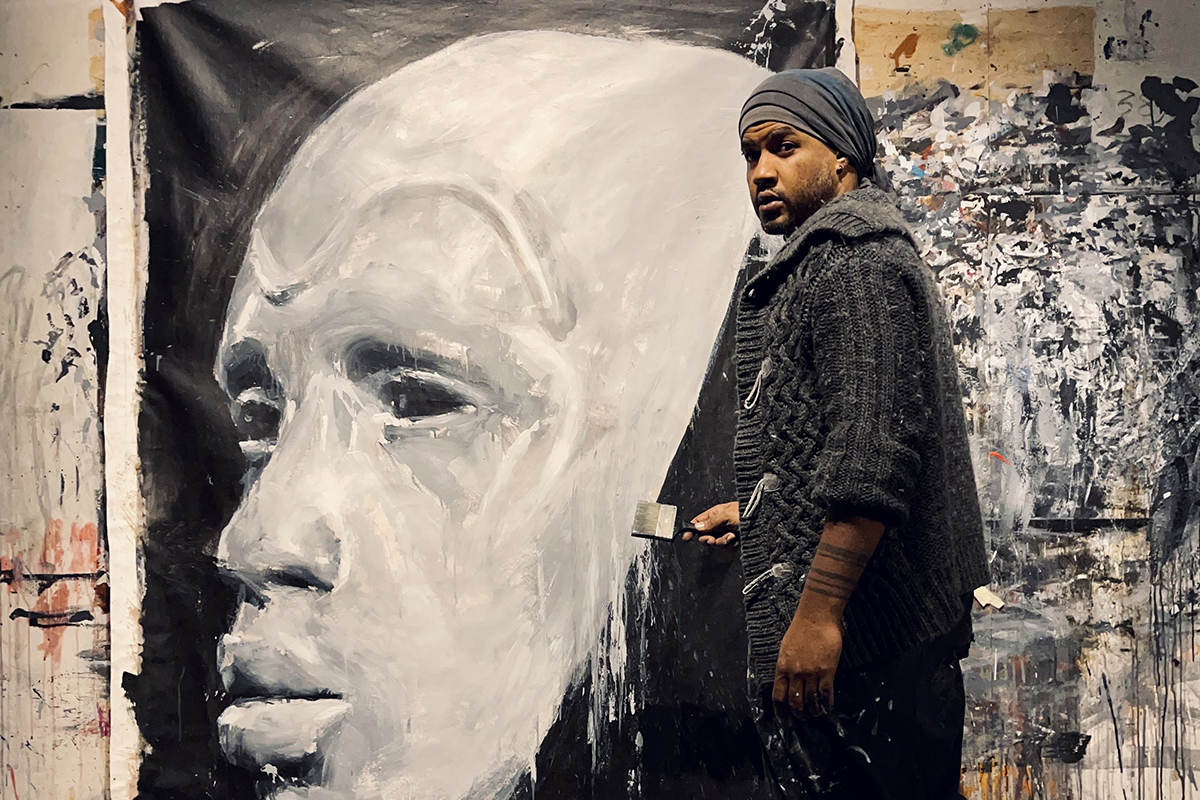 “The first thing that intrigued me about NFTs is the fact that I can have the same work in several places at the same time. And that’s how I thought of Tricolore 2022: a single exhibition in many different places». The large canvases which Luigi Christopher Veggetti Kanku is accustomed to working on with a spatula and brush for weeks at a time have made way for totally digital works of art. In this case, in fact, with the acronym NFT (Non-fungible token) the artist defines his works published on a blockchain network as, in fact, non-replaceable tokens, which certify their ownership and authenticity. He becomes galvanized when he talks about the exhibition of digital works of art which he is touring Italy with in early 2022 and then, starting from the middle of the year, he will take abroad, to Brazil, California, South Africa, and then finally to Florida, at the Florida State University Museum of Fine Arts (Mofa).

One aspect that I like about NFTs is that they are democratic: you don’t need a studio or any professional art tools: if you have a computer that uses programs – and this is something pretty much everyone has – you don’t need anything else. And for what I had in mind, to speak of African heritage in symbolic but immediately understandable terms, NFT was the best way

The Tricolor of Veggetti

«Everything became clear in Venice on January 20th when the Tricolore 2022 tour started with projections of my NFT as its focus at the Akka Project Gallery. Although in the next room, there are also some of my unpublished, more traditional, canvases. There is also the first chance to see Salvini Nero (Black Salvini) ». As for the digital works, Veggetti explains that there are no more than three or four works at a time, starting with Teenager and Le due madri.  In fact, the idea for the Tricolore 2022 project actually began from his reinterpretation of Giovanni Segantini’s masterpiece, as he explains.

While looking at Segantini’s work at the Galleria d’Arte Moderna in Milan, I imagined an African mother with two children. I want to reiterate the importance of ius soli: while the woman in the picture is still part of the generation split between two countries because she emigrated, her two children were born here, so the youngest is depicted being carried by the mother in a traditional African way, but it’s clear the girl goes to school and wears a uniform. Although she does not yet have citizenship, she is definitely Italian

“Definitely Italian can also be said,” continues Veggetti, “for the young girl who sticks out her tongue in Teenager. It symbolizes the language that she uses, her tastes and the way she is behaving, which identify her even before having the opportunity to speak. She is black, she is Italian and it is no coincidence that she wears an orthodontic appliance, with which I wanted to emphasize the economic possibilities of her family, because they have options”.

Before the inauguration, Veggetti didn’t want to reveal anything else about the subjects of his works, which he defines as the protagonists of change, such as the influencer Khaby Lame, whose portrait has now been unveiled at the center of the Venetian exhibition.

After Venice, the works of Tricolore 2022 in February will travel to Milan, exhibited as part of the fourth edition of Anthropology Day, the two-day in-depth study on public anthropology to be held at Bicocca University.

One of the next events will be held in Bergamo, at the Leonardo Da Vinci Institute. When he was designing the itinerary of the exhibition, Veggetti also wanted to include schools, the main place for the education of the new black Italian generation

In spring, Veggetti’s digital art exhibition will transfer to Reggio Emilia. And after that it will move abroad, with the first stop at Salvador de Bahia. As Veggetti explains, “What’s good about digital art is that it doesn’t pose any problems for transport or insurance. There are those who say that it is a momentary phenomenon, but in my opinion, it is a possibility that will remain over time. The public just has to notice it.”