Samar Zaoui and the other leaders of the Sardines’ movement who pull down another wall in politics, that of diversity

Samar Zaoui, 21, is of Tunisian origin and, with Jamal Hussein, she organised the Sardines' demonstration in Modena via Facebook. It is a day of reckoning for politics, which has always treated young candidates of foreign origin only as a smokescreen. 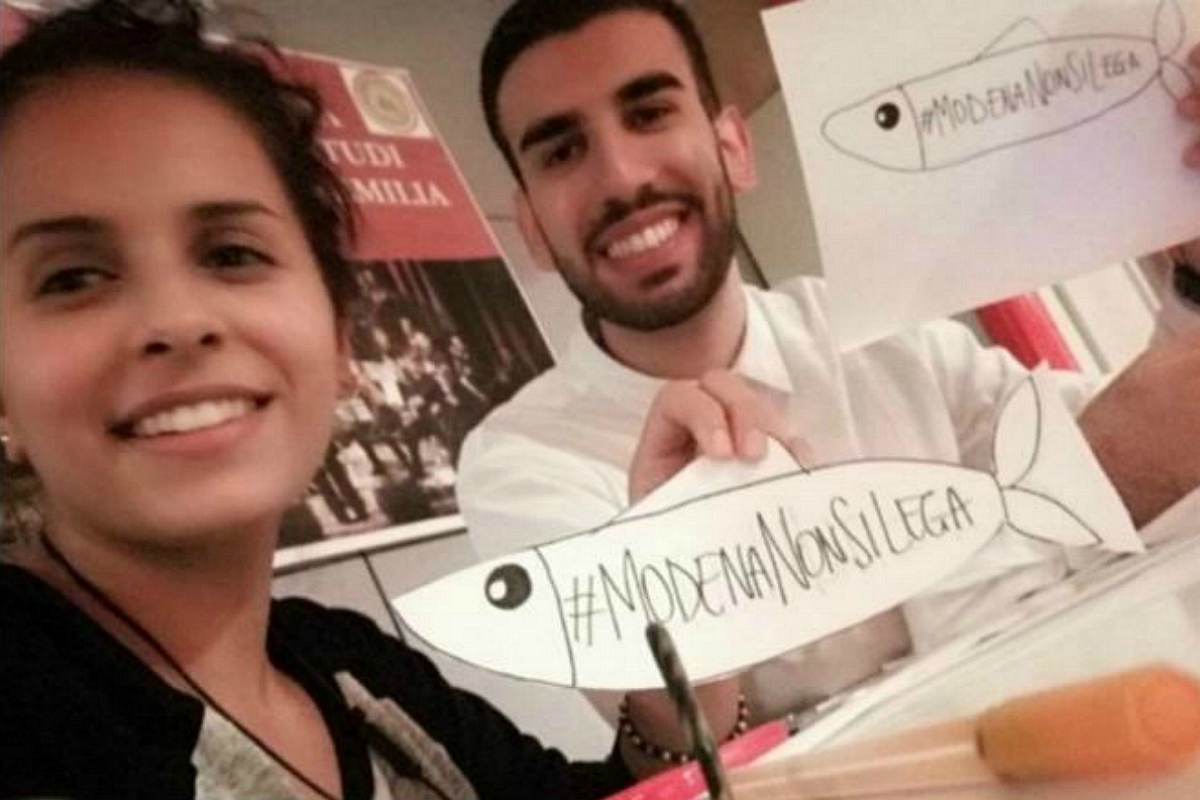 Now the time has come for the Sardines in Milan after Genoa, Bologna and Modena. But, what no one is talking about, what is difficult to interpret or is simply ignored in the sloppy narrative peddled by the mass media, is that within the rising tide of this movement that started on social media and which aims to build a wall against Matteo Salvini’s xenophobic right, we finally also find leaders of foreign descent.

In Genoa, one of the organisers of the Sardines is Simohamed Kaboour. A teacher in an international secondary school, he also leads CoNNGI, a broad network of associations established by the new generations of Italians.

About the Sardines’ demonstration in Genoa he wrote on Facebook: a rising tide of people representing different generations and belonging to different faiths and cultures but all united against fascism. And what they ask is clear: politics must go back to providing serious and concrete proposals and solutions. It’s the end of the line for bad politics.

And even more symbolic is the story of the organisers of the demonstration of the 18th of November in Modena. Both of them were either born or grew up in Italy. Samar Zaoui, was born in southern Tunisia and she is studying Literature and Philosophy; Jamal Hussein, born in Fermo from Lebanese parents, is studying engineering.

The Modenese Sardines were born during a walk when Samar Zaoui explained to her friend Jamal Hussein that Modena was the first city to rid itself of Nazi-fascism on 22nd April 1945. And to NRW, she tells that on the day of the Modenese Sardines, born out of a Facebook event which gained 5000 followers in a day, she died and was reborn.

I am emotional and unguarded, she says about herself. At 21, she is finding it hard to manage her double Italian-Tunisian identity within the movement, and she is still waiting for her citizenship. But, she has understood that she has an advantage over the others because, whether she likes it or not, she personifies the battle against Salvini’s walls and his followers’ hatred against immigrants.

Samar is studying Cultural Sciences in the Department of Literature and Philosophy. She dreams about doing a doctorate to research documents written in classical Arabic. She spends her nights studying and she certainly does not think about a ‘career’ in politics. But she knows that a new leadership formed by young people of migratory background is rising steadily.

«I know that my origin is not a handicap but an advantage», she says. She arrived in Italy in 1999 when she was a few months old. And even if she is still waiting for her citizenship (no, we really didn’t feel like asking her the usual question about whether she feels more Tunisian or Italian), she seems to simply belong in Modena, period. Yet, she says that «you should take a look at yourself from the outside to see what’s inside of you», with reference to her experience as an Erasmus student in Germany. All in all, Samar Zaoui, who was unexpectedly struck by the sea of people who follow the Sardines, explains to us that if she had to define herself, she would prefer to say she was an existentialist.

While in the organisation of the Sardines’ demonstration in Modena, to the battle cry of ‘Modena non si lega’ (a word play on the word Lega – also meaning ties – which literally means ‘Modena untied’), the unguarded and emotional Samar says she only played a logistical role, Jamal, the engineering student, was pivotal and he invested his heart and soul.

Ours is a cross-cutting movement aimed not just at filling city squares but also ballot boxes, to prevent Salvini’s xenophobic right from winning the local elections. Beyond that, I lead a very normal life. I’m not used to leading a public life but we must carry on to stop those wanting to build walls against migrants and refugees, and those who are against an open society.

Of Jamal Hussein, her travel companion and friend, she says: «Jamal doesn’t want to attract attention to his Lebanese origins. He is Marchigiano (from the Marche) through and through, and he’s studying away from home. That’s it, period. He is a positive person willing to stand up for the values he believes in such as loyalty, intellectual honesty and ensuring that promises are fulfilled, that to him are non-negotiable».

And all in all, it was foreseeable and normal that in a Normal Country, two university students would be the ones to remind us to what extent we have become an intercultural society. And most of all in Modena, where each year the local authority grants citizenship to a group of children, against the direction and the beliefs of a significant proportion of the electorate.

«I believe our grassroots movement must continue to be crosscutting, but it must also help to stimulate critical thinking towards a political system that requires people of foreign origin to adapt to certain criteria in order to get into public institutions», continues Samar, who caused a social media storm after posting an upside down photo of Salvini. Immersed in anti-fascist and partisan culture from Emilia, she studied history of religion in school but by the age of 13 she had already written off the Koran, the Bible and the Torah merely as historical texts, and she had moved beyond those. And now, after triggering the Sardines’ movement with Jamal, she is connecting with all other local movements and networks.

I am scared of the mistakes we may make, of political instrumentalisation, of being able to fill the squares but leaving the ballot boxes empty because, as she keeps repeating, there will be local elections in Emilia in January.

But there does seem to be one thing that Samar Zaoui is not scared of, although she doesn’t like to be pigeonholed: being a symbol of a society that is allowing a new inclusive leadership to emerge. Also because, sooner or later, that type of politics that has always used young candidates of foreign origin as a smokescreen, will need to open its doors and pull down the wall that is keeping them at arm’s length. Because, in the end, reality always prevails.