Christian Manuel Perez, doctor in Bologna, volunteer in Iraq. His toughest mission? The one against Covid that took his father from him

Three passports, a thesis written in a military base, a former competitive swimmer and experience as a firefighter. Many lives merged into the hardest challenge. 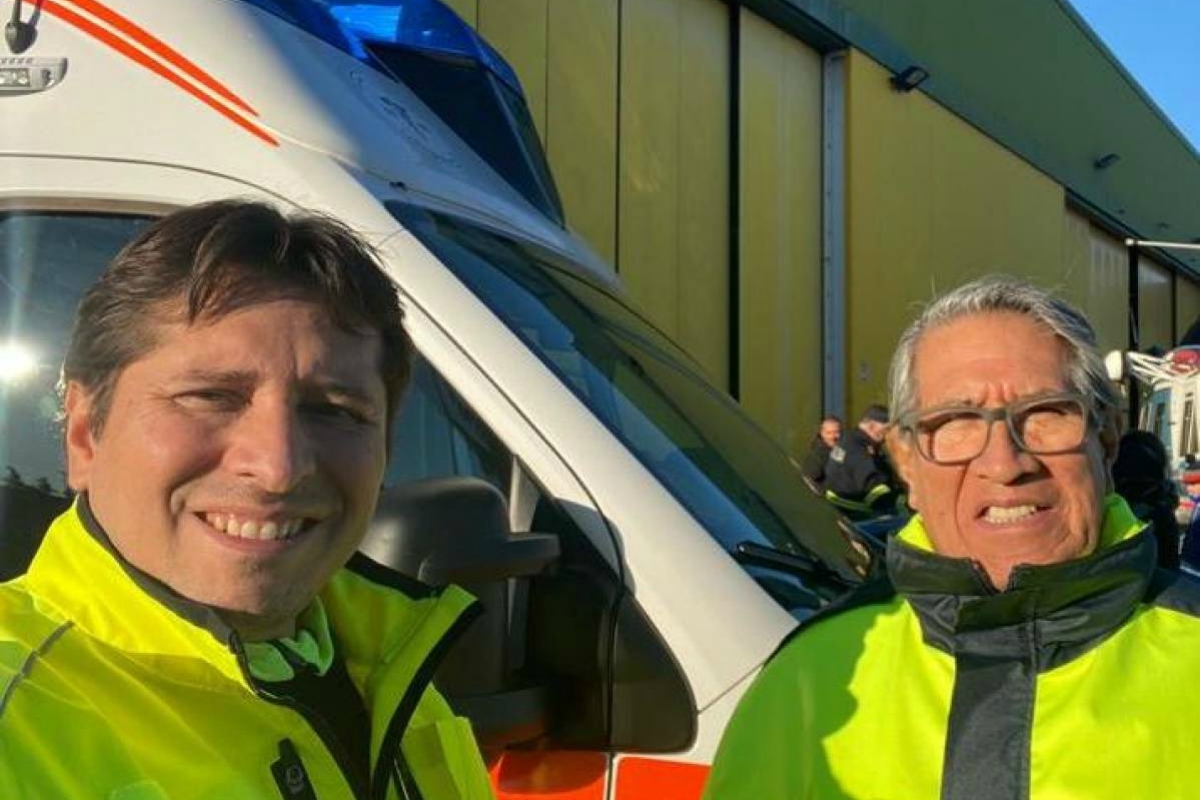 Telling a story like Cristian Manuel Perez’s is almost a necessity. If for no other reason than because it contradicts the common belief that citizens of Peruvian origin only do unskilled work. He has three passports: he was born in 1976 to a Peruvian father and a Polish mother, who was born in a concentration camp in Germany because she was the daughter of an officer, he is an intensive care doctor and anaesthetist. He wrote his specialisation thesis in Afghanistan; he has worked in Red Cross field hospitals in Iraq and in intensive care with Covid patients in Bologna. We met him under sad circumstances: his father, a retired doctor, got infected while helping in a care home and died.

His father, Manuel Efrain Perez, passed away on 20th April. He was president of the Frates Mutinae volunteer association, who honoured him with a minute’s salute of ambulance sirens.

“My father worked with me, organising courses for volunteers and provided assistance in care homes. He became infected in one of these facilities where there was a shortage of personal protective equipment. The helplines sent him from one place to another, no one mentioned testing, no one told us what to do or what not to do. He was a swimmer, which helped him fight in intensive care for several days.”

How was it possible to work without proper protective equipment?

“They said it was a simple flu, that there may be a bit of pneumonia, but unless you have a heart condition, diabetes or a serious disease there was no need to worry. Both my father and I worked with that frame of mind, as did many other healthcare workers who got sick. I admit that at the beginning I continued doing my job using my surgical mask.”

“The story changed along the way. We were equipped with helmets, masks with filters and protective suits, which we now use. I am not accusing anyone, medicine isn’t an exact science and the virus is new. Now we try to protect ourselves.”

You’re a doctor, your brother is a nurse: was it a family choice?

“My father always told me not to go into medicine. He was truly alone and worked to support himself. He said he’d had to work hard and kept telling me that it was a long road. He was afraid I would be disappointed if I never saw the end of it. He was the first in our family to graduate, followed by my uncle who studied engineering. My grandfather had a shoe factory: he gave him the money to come to Italy and enough to support him for two years.”

Did you work during university?

“I wanted to be financially independent from my parents. I started off working as a lifeguard at the Aquazzurra water park in Bologna. My first time in an ambulance was as a driver, then I became a part-time fireman and I spent two years with the municipal police in the province of Bologna. With all the training and work, my teammates from swimming didn’t think I would ever finish university.”

Were you a competitive swimmer?

“I inherited an “Andean” rib cage from my father and, like him, I specialised in finswimming. I got into the national swimming team in 1993 and represented Italy in my first youth championships in France. This was followed by alternating European and World Championships each year. I won gold in Colombia in 1998. I ended my competitive career at the World Cup in Australia a few years later and concentrated on medicine.”

What was your specialisation?

Anaesthesia and intensive care. I wrote my specialisation thesis in Herat, Afghanistan, where I was working at the Italian and Spanish field hospital. I was training the soldiers, giving people check-ups and was in charge of understanding what supplies the Afghan surgeries needed.

Was that your first mission?

“No, the first was in Israel in 2005, where I volunteered for the Red Cross. My thesis was original research, based on three months’ work in the field hospital in Nasiriyah. My last mission was two years ago, now there is so much work in Italy that I can’t stay away for two months anymore, as requested for missions.”

Where do you work in Italy?

“I work where I’m needed. Since I started at the specialist anaesthesia school, I realised that you had to be related to someone to get ahead in healthcare: my father always kept a low profile as a doctor and we were not politically linked to anyone. I focussed on myself and started working as a freelancer.”

Have you ever considered a public hospital?

“It’s because I never wanted to work in a public hospital in the city, with long waiting times, that I always have work. If young colleagues ask me if they will find work, I tell them it’s a false myth that there are too many doctors. That was true in my father’s day, but nowadays, if you are prepared to move around, you’ll find work.”