Alma Neco, the doctor who came from Albania to help in Italy

Alma Neco is 29 and is finishing her specialty training as an anesthetist. When she was invited to join the delegation of doctors and nurses sent to Italy by the Albanian government, she accepted enthusiastically because she thinks of herself as "made in Italy". 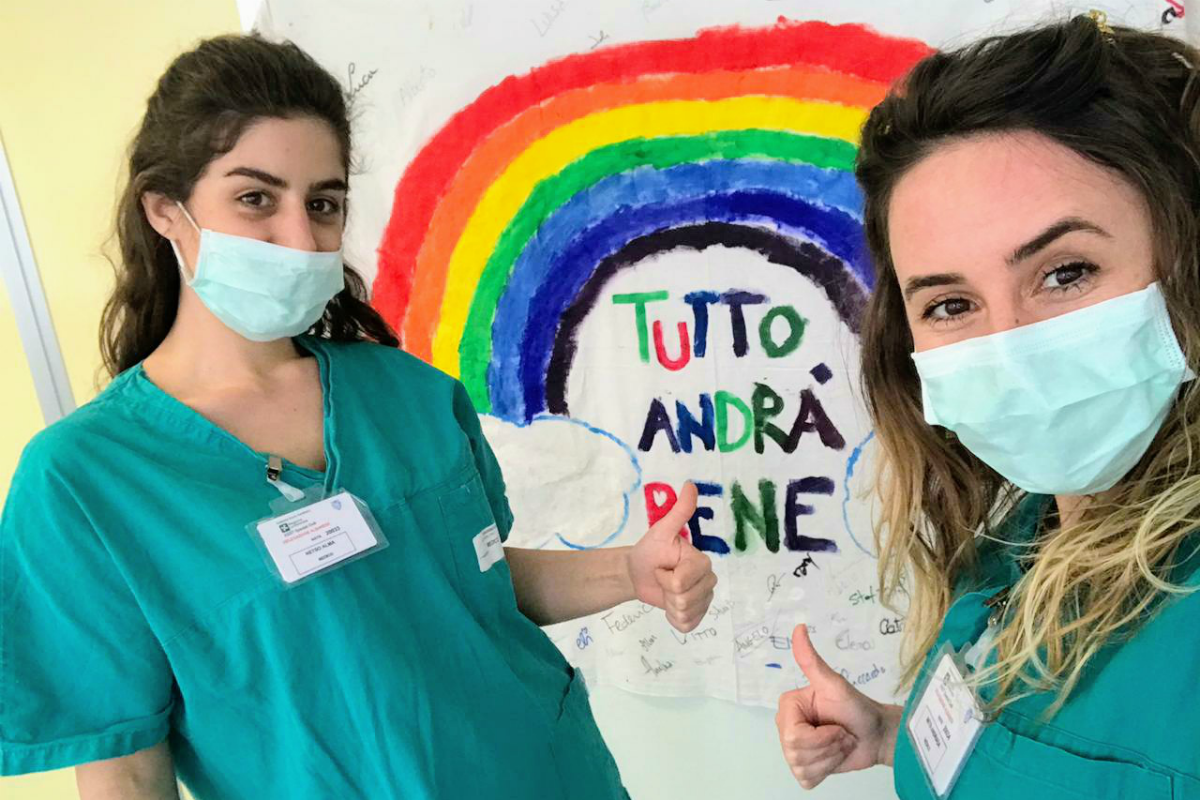 Alma Neco was welcomed to Italy recently along with other members of the Albanian delegation, 20 doctors and 10 nurses, with fanfares, and thanks that warbled and chirped all over Twitter. Even the leader of the Lega party couldn’t get out of the chorus of applause for the Albanians who came to Italy to help us fight Covid-19. Their arrival was preceded by high rhetoric, the kind that raises spirits at what may be the most difficult time, when we don’t know whether the virus is advancing or retreating: a time of doubt, a phase of acute bewilderment due to the long reclusion and the numerous contradictions in the restrictions imposed in a democratic state which struggles to impose its laws and relies on bureaucrats, and different interpretations of the rules.

But what no-one realises, except for people who know her, is that Alma Neco, 29, a specialty trainee doctor, has come to help out in the intensive care unit in the Spedali Civili hospital in Brescia because she was born in Milan and went to nursery school in Codogno, where the first outbreak in Italy occurred.

The story of a home-coming

A coincidence which, when seen from the point of view of our current quarantine, is disconcerting because we wonder if the story of our lives has been written by some unknown hand. Be that as it may, Alma Neco, the daughter of two engineers who migrated to Italy from Valona in the 1990’s and then went back home to set up a business, signed up for the programme organized by the government of the country of the Eagle flag because, as she told us at the end of a long day in intensive care, “Italy gave me so much and I think it is my duty to give something back”. And the doctor who had always wanted to be an anesthetist or an intensivist ‘to save people from death, to give back their soul to people who were dying’, didn’t come just to help us here in Italy.

Italy is her home too. She went to kindergarten in the area that became the first red zone, she came back here for her Erasmus programme in Bologna. And she spent three months specialising at the San Raffaele hospital. In Italy she has two brothers who have studied and are studying at university in Milan.

“I had already started looking after some Covid-19 patients in Tirana hospital, so I signed up enthusiastically for the Albanian government’s programme to send a group of doctors and nurses to Italy”, she explained to NRW. Before arriving in the Spedali civili hospital in Brescia, she took a long detour via Roma and Verona because the airports were closed. And before putting on her gown, she says she met a lot of people, so many that she doesn’t remember how many, including the governor of Lombardy. Now she is shadowing an Italian doctor, “I don’t have my own patients yet”, she tell us by phone and WhatsApp. Alma Neco, who thinks of herself as “made in Italy”, keeps telling us that Italy has given her so much.

When I first arrived in the department I expected the situation to be worse. There are still plenty of resources and lots of skilled people: the problem is that we don’t know how long this will last” she says, explaining that the most difficult thing is moving around in the ward sweating in all the gear needed to protect her from the virus.

She is not afraid of getting ill, although she does point out that the only times it is risky is during breaks, when she stops for lunch and mixes with colleagues for a brief respite. She has only been here for a few days and has attended to old patients but also younger ones, not much over 45 years old.

She has less than a year of specialty training to go and she hopes to get a permanent job in Italy, where she has her childhood memories. And now that she is here, at risk like everyone, she has to reassure her family and husband who are worried about her getting infected. Because after the warm welcome, the applause in hospital, now she is in the wards, she has to learn quickly and do her very best in this month in intensive care in Brescia.

For Alma, who lived here till she was six and came back for the Erasmus programme and then for a few months for her specialty training, Italy is a country that has given her only good memories: never for a moment has she felt like a foreigner. And she has found that the country is the same now as it was when she left, although things have been overturned by the emergency. “You are just the same”, she says, although she knows we cannot be the same after this pandemic, like in Albania where for the time being the number of cases of contagion is limited. “We will have to get used to changing our lifestyle to continue to be healthy, to stay alive, because no-one knows how long it will take to stop the virus”, she explains to NRW.

Helping in the wards

Alma Neco came to help, but also to learn, because she will have to deal with the same problems in the hospital in Tirana where she is going to finish her specialty training to become what she has always dreamt of since she was a child, when she watched a television series about doctors in Italy.

I have always had the same dream: to become an anesthetist to bring people back to life, she explains earnestly.

“The most frustrating thing these days is not knowing how a patient will react. Waiting for lungs to oxygenate and realising that it is not working. The worst thing about this unknown virus is expecting your patient’s body to respond to treatment when it doesn’t happen. It makes you feel helpless. But despite all these difficulties, I’m optimistic because I believe in medicine and we have no alternative,” she says before ending the phone call, exhausted, even though these are only her first days in intensive care in Brescia. With her thoughts turning to her brothers who are in Milan, and who she cannot see because once her shift is over she can’t get out and about or travel.

We are not without memories. Today we are all Italians, and Italy must win and will win this war for us too, for Europe and for the world”, were the words of the Prime Minister of Albania, Edi Rama, as he greeted the team of doctors and nurses, one of whom was the junior doctor Alma Neco, at Tirana airport.

We don’t know whether the person who accepted her as a candidate for this difficult mission realised that she was coming back to Italy also because of her childhood in the Lodi countryside. And that she would end up in another curve on a graph, different from the one which records the epidemic. The rise in the curve of ordinary social frustration which for the moment has flattened but which led many Italians to see all foreigners, even doctors, as Martians, whereas now we welcome them – after the Albanians, doctors from Poland arrived too – as a salvation army.