Abdullahi Ahmed: «2021 will be the year of Generazione Ponte»

This year, as life begins to reboot, meet the founder of the Turin association that aims to free young people with a migratory background from being considered as temporary guests, but rather as active citizens. 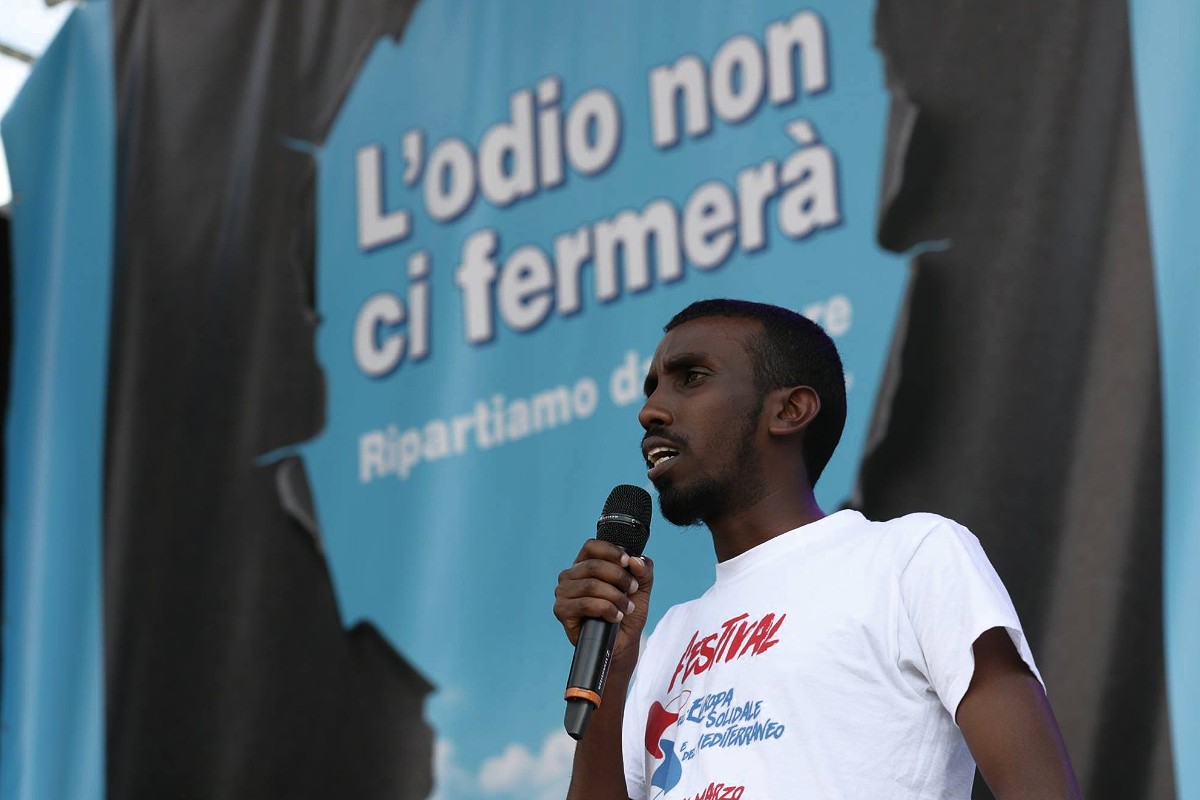 Abdullahi Ahmed was born in Mogadishu, Somalia, in 1988 but has lived in Italy since 2008. His is the story of many young people with a migratory background. The departure from a state inflamed by civil war, a backpack containing only the bare necessities, the desert, the boat in the pitch black of the Mediterranean, the arrival in Lampedusa. Here, however, the story of Abdullahi Ahmed takes different turn. He was transferred to the province of Turin, a city that adopted him and gave him a future. In a short time, Ahmed became a cultural mediator and conceived a model of active citizenship that makes young foreigners feel truly Italian, regardless of having a sheet of paper or legal identification. He went to schools to talk to kids a little younger than him, Italian and non-Italian. Together with a group of friends who come from different continents, he founded the cultural association Generazione Ponte (Bridge Generation), which brings together refugees, second generation people and Italians. He created the Festival of Solidarity in Europe and the Mediterranean, better known as the Ventotene Festival which was inspired by the idea of the open and supportive Europe promoted in Altiero Spinelli’s manifesto. He published his biography, The Look Ahead. After 13 years away from his family in Somalia, he decided it was finally time to catch a plane and go back. The flight was scheduled for March 1, 2020, the Covid pandemic stopped him, but his work as a “bridge maker” has not been affected.

What unites the Bridge Generation?

“This project was born thanks to ten young people from all over the world: Pakistan, Afghanistan, China, Romania, Italy, Peru, and two from Somalia. We are free people, not conditioned by preconceptions and superstructures. What unites us is the desire to create concrete actions and be a bridge between different generations and cultures. We want to change the narrative of immigration”.

How should the narrative change?

“There is always talk of the arrival of migrants, always in emergency terms, but never what happens after and there is never room for the positive aspects of immigration. On the side of those who welcome migrants, there is some ignorance, they do not know the difference between a refugee, an asylum seeker or someone who is stateless. This creates mistrust and the tendency to mix very different contexts. In Italy there is still no organic law (institutional act) on refugees and asylum seekers and few understand the peculiarity of this matter. It’s 2021, and the answers we give to immigration were innovative in the 1970s”.

What tools are lacking?

“We don’t just need assistance for those who arrive, but also tools to really build a future, the same that those born here should have. When you think of Africa, you think of villages lost in the middle of nowhere, but Africa has changed and it is time to understand it. Kids very often come from cities that are much more modern and technological than you imagine. But the responsibility for this change also lies with us young migrants”.

What do you mean by responsibility for change?

“You can’t be a foreigner forever. It’s right that those who are committed to being citizens, those who make themselves useful, should be rewarded. The effort must also come from our side. Generazione Ponte organizes many cultural initiatives, tours and historical routes in Italian cities”.

Why is history and culture important to the Bridge Generation?

I think it is important to know the history of Italy in order not to feel like just a guest, it is necessary to know that Italians were also once migrants, often treated with contempt. It is necessary to find a common dialogue in order not to treat the foreigner as an object but as a subject. Rather than integration, we should talk about interaction

“You should ask who the citizen is, rather. For me, the citizen is the one who does something concrete for the community in which he lives. Yes, we must fight for jus soli and to make the process for citizenship more flexible, but at the moment there is no political will, whatever party we talk about, and unfortunately this is not an imminent objective. At the time of the Gentiloni government we spent three weeks in tents in Piazza Castello, in Turin. We got a meeting in the Senate with Pietro Grasso. Salvini decided that you could apply for citizenship only after four years, the PD-5s government has brought it back to three. As you can see, there is no political will”.

When I think of all the young people of foreign origin who make this country better on a daily basis, I ask myself and I would like to ask politicians: “What else do they have to show you?” For this reason, in 2021 I propose an alternative: active citizenship to start from scratch

What are your goals for the immediate future?

“During Covid we changed our social interventions, shifting them to welfare. Now we want to start again. It would be nice to be able to go back to schools and think about the new “we” that should emerge in the post-pandemic phase. This year everyone has understood the importance of the right to travel, the right to education and health. And perhaps it is even more useful to hear about it from those who have escaped wars, famines and pandemics, from those who had to fight to start that journey”.

Will it be a year of new bridges?

“I think there will be a new interest in building bridges, in funding scholarships for children living in countries that do not protect their citizens. By June 2021 we would like to join the Italian Agency for Cooperation and Development, to show that social activism works in every context, and because we would be the first such multicultural association to succeed. We would be a positive model, and perhaps pioneers for a future told in a different way”.