Bruno Cerella: “Through basketball, I achieved my dreams. With Slums Dunk I am giving back”

The famous basketball champion, along with his fellow player Tommy Marino, has launched a project in the shanty towns of Kenya and Zambia. It aims at aiding social development through basketball courses and friendly matches. On Saturday the 19th of October the non-profit participated in a seminar dedicated to sport and human rights, organized by… 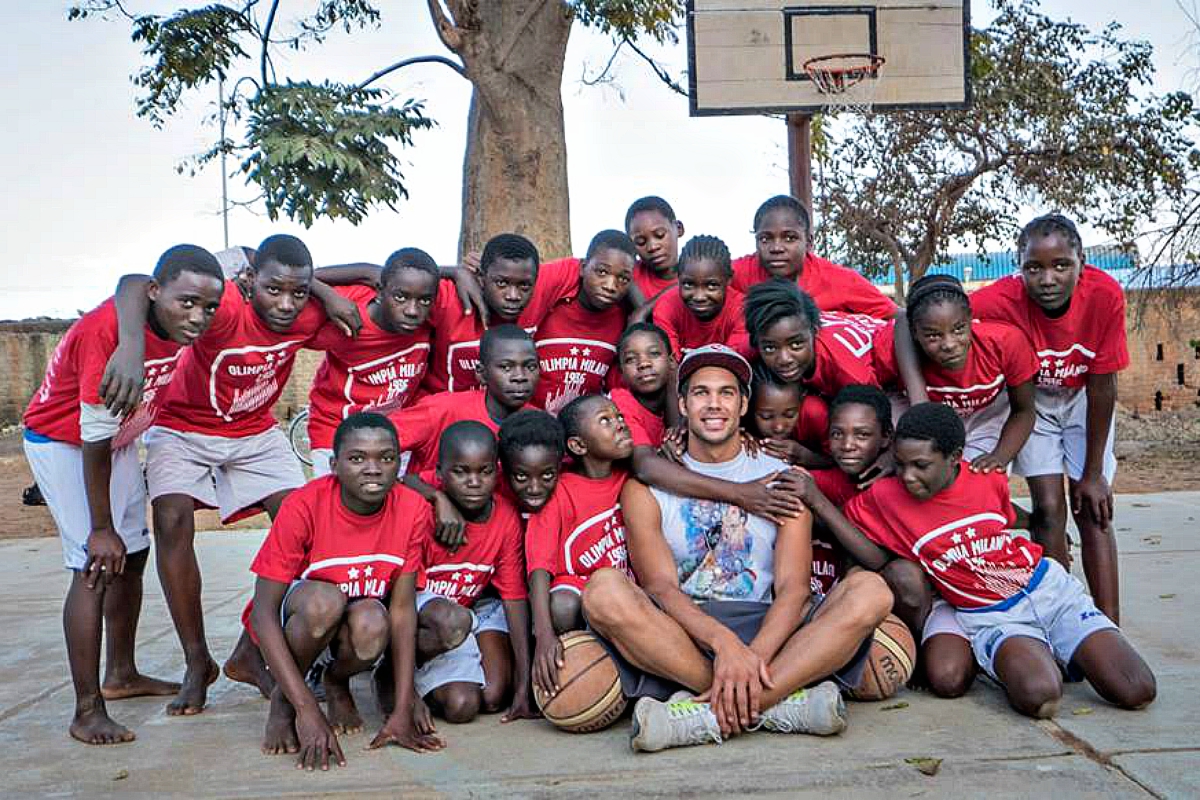 Bruno Cerella, 33, is an Argentinian with Italian citizenship (his paternal grandfather was from Pescara, his grandmother from Aquila). He plays for Reyer Venezia and has worn the azure shirt of the national team. Cerella believes that sport is not only about competition but has educational and social value.

Along with the basket-baller Tommy Marino, he has founded the non-profit organization Slums Dunk, a project developed in Kenya and in Zambia to get young people from the most disadvantaged areas involved in social advancement through basketball. On the 19th October, Slums Dunk participated in a seminar on sport and human rights called “Lo Sport in Rete,” (Sport in the Net) organized by the association AltroPallone, at the Fabbrica del Vapore, Milan, with the media partnership of NRW.

“We try to be there to help young people and their families understand the social value that sport has. Sport is not only competition or a game. It is a way to communicate healthy values, fundamental for everybody’s life,” explains Bruno Cerella.

Cerella, a common Italian surname for many Argentinians…

“My paternal grandparents. Thanks to them when I was thirteen years old I received Italian citizenship. It was a gift that allowed me, when I had the chance, to come to Italy to play.”

You started in series C2, ended up in the first division, and wore the shirt of the national team…

“Sport allowed me to achieve my dreams and to become the person that I am. At a certain point I thought I should give back to those who have not had the same possibilities I have.”

In 2011 you began thinking about Slums Dunk, which became a reality a couple of years later. The name is already evocative.

“Slam dunk in basketball is when you smash the ball through the hoop. We thought of Slums dunk, distorting the word slam into slums, the name of the shanty towns around the world.”

How did the idea come about?

“In 2011 I went to spend 20 days in Kenya, playing basketball in the shantytowns, along with another basketball player called Tommy Marino. We wanted to make our sport part of a life experience. We chose Kenya because the English language is widespread there and because they have a huge passion for our sport. The thing was born from there. We looked for an association in the country, we chose the smallest one there was, to have a point of connection in the region.”

Now you have grown…

“We have 2 Basket Academys in Kenya, 2 in Zambia and we are working to expand into Argentina. We want to do something in Italy too, in Milan and its suburbs, where we also want to include immigrant players. In 2014 we built the first basket-ball court in the shantytowns of Mathare, in Nairobi. There 95 thousand people – of whom half are under 18 – live in an area of one and a half kilometres, with problems with water, electricity, and hygiene services. Obviously, there were no basketball courts. Today in the Nairobi ‘minibasket’ school 100 boys and girls under eighteen are involved, and the life skills project, which aims to develop their understanding of their own resources and of their capacities and attitudes, involves 1000 children under 15 in 10 informal schools in the shanty towns.

“Yes definitely, also in the Basket Academy, where they are taught to play and to referee. The most important thing we have been seeing is that the involvement in sport keeps young people away from drugs, from prostitution, and from committing the crimes that are quite widespread in certain environments. But the fact that their performance in school greatly improve should also be underlined. 40 of the young people have obtained sport scholarships to support their studies. Two are in an American college, one has come to Italy. This kind of thing would have been unimaginable for them before.”

How many young people are involved?

“In every Basket Academy there are 140-150 children. The health and health education projects involve about 5000 young people together with their families. We have dental health projects, gynaecological health projects, and one to prevent HIV.”

Do you plan to expend to other countries?

“We want to make sure our projects are solid and concrete. We spend our holidays playing basketball in Kenya or in Zambia. Next year we will go to Senegal. We want to concentrate on what we are doing and make sure we do it as well as possible.”

You have spoken about sport as a vehicle for the transmission of healthy values. Do episodes of racism, of the kind that happen on football fields, occur on basketball courts too?

“It has happened in the USA, in the European courts, and even in Italy. The episodes haven’t been as serious as in football. But some teams have been fined for the bad behavior of their fans. The problem is that there are still people who don’t understand that we are all share the same planet.”